A true story of hope and courage Standing Together in the face of astonishing challenges During his fourth deployment, US Marine Corps Sergeant Carlos Evans stepped on an IED–and the loss of both legs and his left hand was just the beginning of the struggle for his life 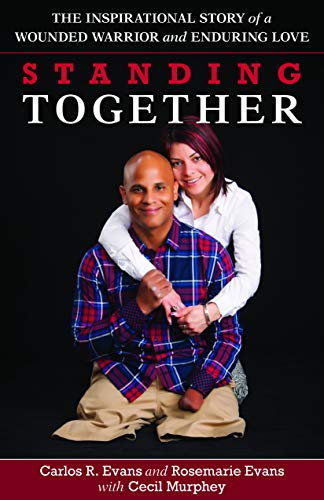 For the next two years, he and his wife, Rosemarie, went through the rehabilitation process together. As a nurse and mother of two young children, Rosemarie was used to caring for people, but the task of taking care of her triple-amputee husband brought new challenges every day. In addition to his limb loss, Carlos faced PTSD and developed an addiction to painkillers. He was sure Rosemarie’s life would be better without him–and that it might have been better if he hadn’t survived at all.

But unlike the majority of marriages put under similar strain, Carlos and Rosemarie stayed together. With the help of family, friends, and–most importantly–a strong faith, they’ve built a solid marriage and discovered a ministry they never expected. By the hand of God, their story, which began in devastation, has turned into one that draws in and lifts up more people than either of them would ever have dreamed.

Not only will disabled veterans and their loved ones find help here, Carlos and Rosemarie’s captivating journey also speaks to those who long for stronger marriages, care for loved ones with disabilities, or are facing a new normal in their own lives, small or large. It is a powerful resource for leaning on God in the midst of life’s great difficulties–and for finding ways that, through faith, profound loss can bring incredible blessing.

Read an excerpt from Kregel by clicking here.

A true story of courage. Carlos lost his legs and left hand when he stepped on an IED during the war. The story is about his recovery, and then how he lives today.
Also, how it affected his wife. When something like that happens, it affects the whole family, especially his wife. There is a lot for her to deal with the kids to care also. After he got back to the states, she stayed with him at the hospital.
The book is a very inspiring story. I recommend everyone to read it.

I received a complimentary copy of the book from the read with Audra book tours. This review is my own opinion.

Sgt. (Ret.) Carlos R. Evans is a minister with the Assemblies of God USA, a Wounded Warrior spokesman, and a motivational speaker. Born in Puerto Rico, Carlos was an avid athlete through his high school and college years.  At university, he studied Theology and was very active in his church. When the tragic events of September 11th occurred, he felt compelled to join the family legacy of service in the US Marine Corps, and originally planned to join as a Chaplain.

Carlos served three tours of duty in Iraq and was assigned to Afghanistan for his fourth deployment. In May 2010, he was the squad leader on foot patrol when he stepped on an improvised explosive device. The blast took both of his legs and his left hand. Medically discharged after his rehab at Walter Reed, Carlos served in the Marine Corps for eight years.

Rosemarie Evans, also a native of Puerto Rico, is an experienced nurse. She is now a full-time caregiver and student working toward a master’s degree in marriage and family from Liberty University. Carlos and Rosemarie live in Orlando, Florida with their two daughters.

Gardening Could Be The Secret That Helps You Live To 100

Originally Posted on lilliesandlashes.com Your to do list is endless, the days are long and yet you feel like you can’t get it all accomplished!

What Is In The Weight Loss Pack With Heart & Body Naturals?

Originally Posted on Conlonlace.com Interested in the Weight Loss Pack with HBN?  Do you want to lose weight, reduce some inflammation and belly bloat or